The paper considers two scenarios - one where the maximum possible harvest frequency was calculated based only on temperature, and another where maximum possible harvest frequency was calculated based on both temperature and precipitation. The results show that the global annual harvest area could be expanded by the equivalent of 38% and 14% of current global cropland area, respectively, through achieving multiple crops per year in suitable areas. This assumes that the global area of cropland would not increase. The difference between the temperature-limited scenario and the scenario accounting for both temperature and precipitation suggests that water management may be a key limiting factor to cropping intensification.

The figure below shows which countries have the most potential to intensify cropping. Darker red means a greater gap between current and potential cropping intensity.

To feed the world’s growing population, more food needs to be produced using currently available cropland. In addition to yield increase, increasing cropping intensity may provide another promising opportunity to boost global crop production. However, spatially explicit information on the cropping intensity gap (CIG) of current global croplands is lacking. Here, we developed the first spatially explicit approach to measure the global CIG, which represents the difference between the potential and actual cropping intensity. Results indicate that the global average CIG around the year 2010 was 0.48 and 0.17 for the temperature- and temperature/precipitation-limited scenarios, respectively. Surprisingly, global harvest areas can be expanded by another 7.36 million  km2 and 2.71 million km2 (37.55% and 13.83% of current global cropland) under the two scenarios, respectively. This will largely compensate the future global cropland loss due to increasing urbanization and industrialization. Latin America has the largest potential to expand its harvest area by closing the CIGs, followed by Asia. Some countries in Africa have a large CIG, meaning that some additional harvests can potentially be achieved. Our analysis suggests that reducing the CIG would provide a potential strategy to increase global food production without cropland expansion, thus also helping achieve other Sustainable Development Goals such as biodiversity conservation and climate change mitigation. 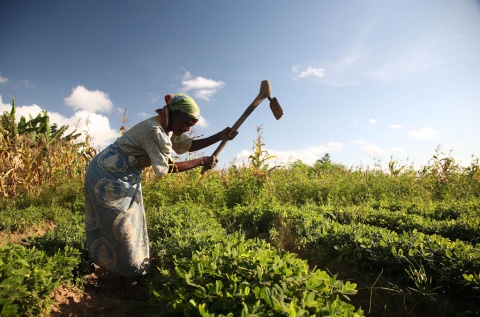