The net flux of carbon dioxide (CO2) from atmosphere to land is made up of fossil fuel and cement emissions minus the CO2 which is absorbed by the ocean, and minus the atmospheric CO2 increase – in other words, a CO2 molecule which is emitted may have three fates: absorbed by the ocean, stays in the air, or is absorbed by the terrestrial biosphere. While the numbers pertinent to these different fates are well-known, the contribution of land use and land-cover change to the atmosphere-land flux is subject to much higher uncertainties, and has been, argue the authors, generally underestimated in models to date (meaning in both directions: atmosphere <-> land, but especially in the land to atmosphere direction). The article identifies the following causes for these underestimations:

DGVMs typically model vegetation on land at a resolution of thousands of kilometres squared, with net changes in vegetation cover being calculated for the region as a whole. However, seemingly opposing changes may take place within a region of such size which equate to no net change in the model, but which may in reality result in a dramatic change in carbon fluxes. For example, within a region over a set period of time, the total area of deforestation and afforestation may be equal. But deforestation results in both fast and slow carbon losses to the air, while afforestation only leads to slow increases in CO2 uptake. Thus a model which considers the two areas to be equivalent will underestimate the changes in carbon flux associated with this shifting cultivation.

While DGVM’s take account of deforestation, they are less able to account for wood harvesting within forests. This means that if the total area of forest cover in a region does not change, but harvesting of wood is taking place and resulting in loss of biomass and consequent changes in carbon fluxes, the model will not account for these, and thus will underestimate the change in carbon flux associate with this land use.

Management of cropland or pasture:

DGVMs have historically only taken into account general land-use, and have not incorporated data about the management practices in place within each land-use type, which can majorly affect the carbon fluxes associated with the land-use. This is therefore a key cause of uncertainty.

The article goes on to use comparisons between different DGVMs, which variably account for the above land management practices, in order to estimate their impact on the carbon cycle. They found that models which account for shifting cultivation, wood harvesting and/or cropland/pasture activities show a systematic increase in carbon flux associated with land use and land cover change (FLULCC). Given that the global carbon budget for the historical period investigated (1901–2014) is known, the increased FLULCC must be balanced by increased residual flux to the land (i.e. terrestrial carbon uptake must be higher than previously assumed if there is a net increase in emissions due to land use and land cover change, but no change in our estimation of total carbon budgets). The authors suggest that increased photosynthesis in response to increasing atmospheric CO­2 may account for much of this extra carbon uptake.

The article briefly considers the implications of these findings for future carbon mitigation strategies, in particular the implications for reforestation efforts, and how these may be complicated by future climates. The authors conclude that the high uncertainties apparent in our modelling of current terrestrial carbon fluxes translate into large uncertainties in modelling of future carbon fluxes. They recommend that future modelling approaches seek to incorporate accurate reflections of human land management practices.

The terrestrial biosphere absorbs about 20% of fossil-fuel CO2 emissions. The overall magnitude of this sink is constrained by the difference between emissions, the rate of increase in atmospheric CO2 concentrations, and the ocean sink. However, the land sink is actually composed of two largely counteracting fluxes that are poorly quantified: fluxes from land-use change and CO2 uptake by terrestrial ecosystems. Dynamic global vegetation model simulations suggest that CO2 emissions from land-use change have been substantially underestimated because processes such as tree harvesting and land clearing from shifting cultivation have not been considered. As the overall terrestrial sink is constrained, a larger net flux as a result of land-use change implies that terrestrial uptake of CO2 is also larger, and that terrestrial ecosystems might have greater potential to sequester carbon in the future. Consequently, reforestation projects and efforts to avoid further deforestation could represent important mitigation pathways, with co-benefits for biodiversity. It is unclear whether a larger land carbon sink can be reconciled with our current understanding of terrestrial carbon cycling. Our possible underestimation of the historical residual terrestrial carbon sink adds further uncertainty to our capacity to predict the future of terrestrial carbon uptake and losses. 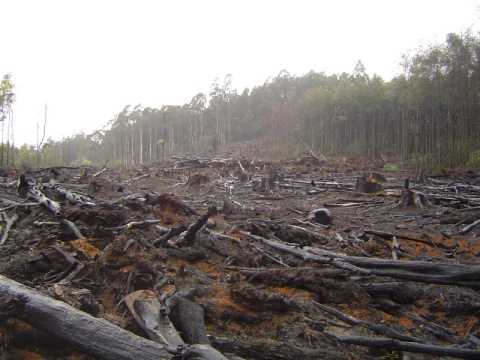