Understanding the influence of neighbourhood food environments in light of recent changes in society and rising levels of overweight and obesity has become very important.

While consumption of takeaway foods has been linked to poor diet and increase in weight, identifying the association between the exposure to food environments, diet and body weight has been challenging for a variety of reasons.  Researchers at the University of Cambridge analyse the extent to which exposure to takeaway outlets in home, work and commuting environments was associated with its consumption, body mass index and the likelihood of being overweight and obese in Cambridgeshire, UK. The study reveals that exposure to food outlets in the home and work  environments was strongly associated with consumption of takeaway food. While policy initiatives limiting neighbourhood access to unhealthy foods are in place, the researchers suggest that such policies would be most effective if targeted around workplaces.

Participants: Working adults participating in the Fenland Study, Cambridgeshire, UK (n=5442, aged 29-62 years), who provided home and work addresses and commuting preferences. Takeaway food outlet exposure was derived using data from local authorities for individual environmental domains (at home, at work, and along commuting routes (the shortest route between home and work)), and for exposure in all three domains combined. Exposure was divided into quarters (Q); Q1 being the least exposed and Q4 being the most exposed.

Results: In multiple linear regression models, exposure to takeaway food outlets was positively associated with consumption of takeaway food. Among domains at home, at work, and along commuting routes, associations were strongest in work environments (Q4 v Q1; β coefficient=5.3 g/day, 95% confidence interval 1.6 to 8.7; P<0.05), with evidence of a dose-response effect. Associations between exposure in all three domains combined and consumption were greater in magnitude across quarters of exposure (Q4 v Q1; 5.7 g/day, 2.6 to 8.8; P<0.001), with evidence of a dose-response effect. Combined exposure was especially strongly associated with increased body mass index (Q4 v Q1; body mass index 1.21, 0.68 to 1.74; P<0.001) and odds of obesity (Q4 v Q1; odds ratio 1.80, 1.28 to 2.53; P<0.05). There was no evidence of effect modification by sex.

Conclusions: Exposure to takeaway food outlets in home, work, and commuting environments combined was associated with marginally higher consumption of takeaway food, greater body mass index, and greater odds of obesity. Government strategies to promote healthier diets through planning restrictions for takeaway food could be most effective if focused around the workplace.

Read the paper here. You can also access a Science Daily article discussing the research here.

There are a number of resources on health, food and diet on the website. Try searching under healthy food policy here or search cloud tags such as ‘healthy diets’ or just ‘diet’. 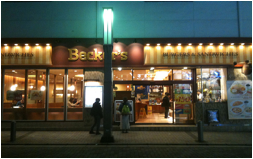