Feeding Britain from the ground up

This report from the UK’s Sustainable Food Trust models the impacts on food production, land use, diets and self-sufficiency of a country-wide switch to sustainable farming methods, based on mixed farming rotations and grazing livestock.

By way of context, the report discusses the “land-sparing” versus “land-sharing” debate, citing the TABLE explainer What is the land sparing-sharing continuum? It argues that these two visions - one involving intensification of production and reduction of farm land extent, and the other involving farming methods that “work with nature” (the report’s phrasing) - are at the root of disputes over the future of British farming. Note that the land sparing approach is also at the heart of the ecomodernist movement.

In its modelling, the report does not use a specific type of sustainable agriculture (such as organic or regenerative), but rathers it adopts some guiding principles:

In practice, this looks like: minimising external inputs such as synthetic fertilisers; using crop rotations to build fertility; using pasture-based systems to raise livestock; minimising pollution; promoting diversity on the farm, e.g. through species-rich field margins. The report explicitly notes that a biological approach to farming does not mean rejecting technology where appropriate, e.g. crop breeding programmes or alternative sources of feed such as heat-treated food waste.

The modelling results show that:

The report does not assess the net climate impacts of the modelled changes, but it suggests that significant carbon sequestration is likely through mixed farming, increases in woodland and agroforestry cover, hedgerows, land for nature and rewilding, and changes to grazing management.

The methane issue is raised. The authors argue that reduction but not elimination of livestock methane is important, and that feed additives, vaccines and selective breeding can help to reduce methane emissions. The main posited climate benefits of grazing livestock are in eliminating nitrogen fertiliser use (and subsequent emissions) cutting out imported feeds linked to deforestation. See the TABLE explainers Agricultural methane and its role as a greenhouse gas and Methane and the sustainability of ruminant livestock.

Read the full report, Feeding Britain from the Ground Up, here or here (PDF link). See also the TABLE explainer How can we reduce food-related greenhouse gas emissions? 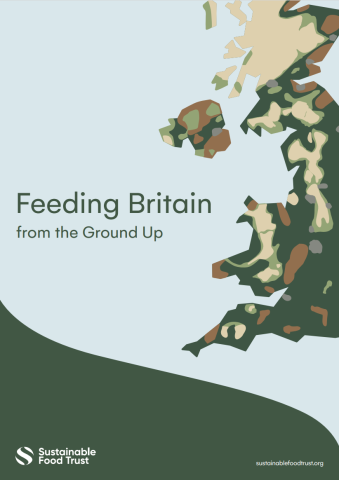