This book, by Jonathan Coppess, explores the history of agricultural policies in the United States.

At the intersection of the growing national conversation about our food system and the long-running debate about our government’s role in society is the complex farm bill. American farm policy, built on a political coalition of related interests with competing and conflicting demands, has proven incredibly resilient despite development and growth.

In The Fault Lines of Farm Policy, Jonathan Coppess analyzes the legislative and political history of the farm bill, including the evolution of congressional politics for farm policy. Disputes among the South, the Great Plains, and the Midwest form the primordial fault line that has defined the debate throughout farm policy’s history. Because these regions formed the original farm coalition and have played the predominant roles throughout, this study concentrates on the three major commodities produced in these regions: cotton, wheat, and corn. Coppess examines policy development by the political and congressional interests representing these commodities, including basic drivers such as coalition building, external and internal pressures on the coalition and its fault lines, and the impact of commodity prices. This exploration of the political fault lines provides perspectives for future policy discussions and more effective policy outcomes.

Coppess, J., 2018. The Fault Lines of Farm Policy: A Legislative and Political History of the Farm Bill. University of Nebraska Press, Lincoln. 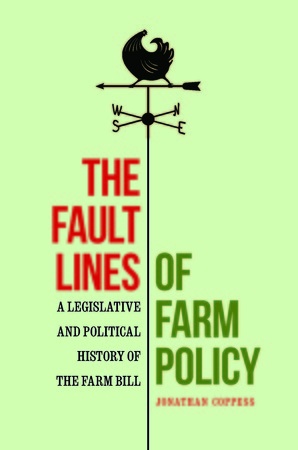