This paper finds that many of stocks in the northeast Atlantic are being fished sustainably today and that, given time, those populations should continue to recover. This is particularly positive news as there has long been widespread criticism that the European Union's Common Fisheries Policy is failing.

The researchers relied on data collected largely by government research institutes, including large programs at hundreds of fish markets and at sea on hundreds of fishing and research vessels operating every day of the year. The data consist of millions of measurements of fish: their length, weight, sex, developmental stage, and estimated age.

It is believed that reforms put in place in 2002 were responsible for the positive results seen in 2011 when, for the first time, the majority of fish stocks were being fished sustainably.

Analyses of global fish stocks paint a mixed picture of success, with some holding fishery management responsible for the poor status of many stocks or predicting widespread collapse. Some suggest a stable or improving situation in certain jurisdictions. The debate is particularly polarized in the European Union, where the Common Fisheries Policy (CFP) has been criticized for failing to protect stocks, while others argue that a rebuilding process is underway. We show that substantial change in stock trends occurred in the area around the turn of the century: since then, the fishing pressure (as measured by the exploitation rate) has reduced continuously and there have been increases in biomass, demonstrating the potential for stock recovery. In 2011, for the first time, the majority of assessed stocks, where reference points are defined, were fished sustainably. The reductions in fishing pressure were associated with declines in fishing effort. The last reform of the CFP, in 2002, introduced effort control as part of more enforceable management measures, which were also based on longer-term plans. Further reforms to the CFP are currently being developed, so it is important, when correcting its weaknesses, to also acknowledge and build on the success of a major reduction in the fishing pressure on European fish stocks.

To read more about this research, take a look at this Science Daily article. 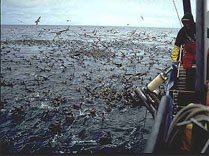