Efficiency of land use changes for mitigating climate change

This paper presents a ‘carbon benefits index’ to measure how land use change contributes to global carbon storage and reduction in greenhouse gas emissions. The index accounts for both the carbon that could be stored if the land were reforested, and the carbon emissions of producing the same food elsewhere.

The index measures carbon benefits in tonnes of CO2 eq. per hectare per year. It first calculates direct emissions from a given piece of land and any reductions in emissions through replacing fossil fuels with bioenergy. Then, it gives a carbon value to any food produced on the land, by assuming that if the food had not been produced on that particular land, it would have been produced elsewhere at the global average of emissions for that food type.

The index incorporates a ‘carbon opportunity cost’ (COC), which can be calculated either by the ‘carbon loss’ method (where total carbon loss from plants and soils associated with producing a food are divided by global production of that food), or by the ‘carbon gain’ method (which accounts for the carbon that could have been sequestered if the average land required to produce a food were instead reforested). See the ‘Methods’ section of the paper for full details of how the index is calculated.

The paper applies the index to several case studies.

For example, it concludes that reforesting certain low-yield beef systems in Brazil would increase carbon benefits five-fold. The beef systems in question are difficult to intensify because they are located on steep ground.

In another case study, the paper looks at the effect of dietary change by adding both direct production emissions and carbon opportunity costs. As shown in the figure below, the carbon costs of food consumption appear much higher when the carbon opportunity costs are included, as opposed to the commonly-used Life Cycle Assessments that often only look at direct production emissions. Using this framework, vegan diets have carbon costs of less than a quarter of current Northern European diets. 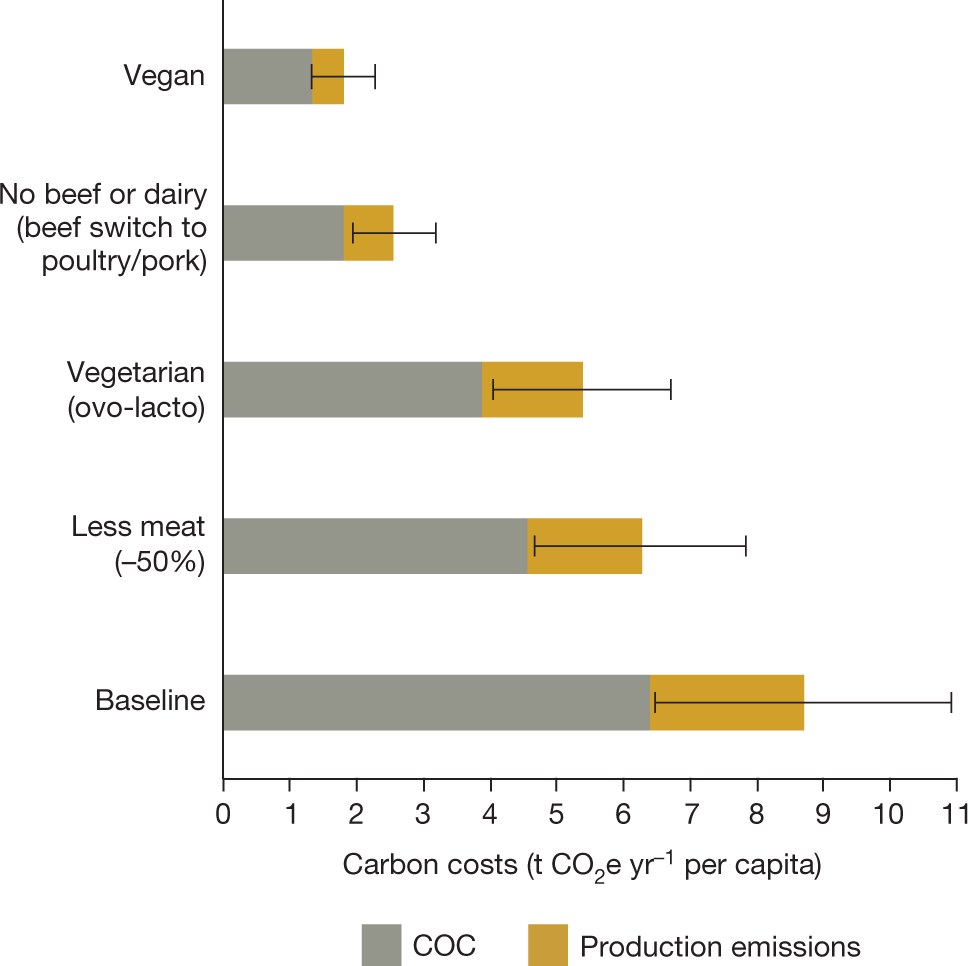 A ‘Carbon Benefits Calculator’ is provided in the supplementary data. The index does not factor in biodiversity or other impacts on ecosystems.

Land-use changes are critical for climate policy because native vegetation and soils store abundant carbon and their losses from agricultural expansion, together with emissions from agricultural production, contribute about 20 to 25 per cent of greenhouse gas emissions. Most climate strategies require maintaining or increasing land-based carbon while meeting food demands, which are expected to grow by more than 50 per cent by 2050. A finite global land area implies that fulfilling these strategies requires increasing global land-use efficiency of both storing carbon and producing food. Yet measuring the efficiency of land-use changes from the perspective of greenhouse gas emissions is challenging, particularly when land outputs change, for example, from one food to another or from food to carbon storage in forests. Intuitively, if a hectare of land produces maize well and forest poorly, maize should be the more efficient use of land, and vice versa. However, quantifying this difference and the yields at which the balance changes requires a common metric that factors in different outputs, emissions from different agricultural inputs (such as fertilizer) and the different productive potentials of land due to physical factors such as rainfall or soils. Here we propose a carbon benefits index that measures how changes in the output types, output quantities and production processes of a hectare of land contribute to the global capacity to store carbon and to reduce total greenhouse gas emissions. This index does not evaluate biodiversity or other ecosystem values, which must be analysed separately. We apply the index to a range of land-use and consumption choices relevant to climate policy, such as reforesting pastures, biofuel production and diet changes. We find that these choices can have much greater implications for the climate than previously understood because standard methods for evaluating the effects of land use on greenhouse gas emissions systematically underestimate the opportunity of land to store carbon if it is not used for agriculture. 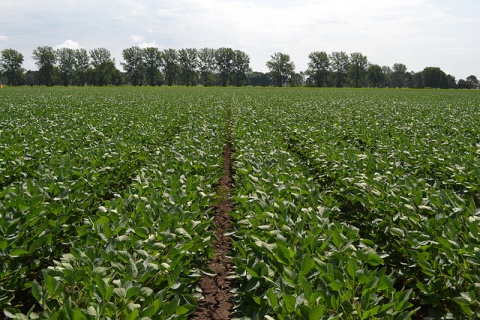