The impacts of palm oil plantations on human wellbeing depend on context and are neither uniformly negative nor positive, finds this study of villages in Indonesia. Oil palm plantations are more likely to lead to improved basic, physical and financial well-being in villages with relatively low existing forest cover and where most people make a living by producing goods for market, compared to villages with higher forest cover and where most people have subsistence-based livelihoods.

The study came to its conclusions by comparing similar villages that either had or did not have nearby development of oil palm plantations. Sample villages were matched based on factors including baseline village wellbeing, agricultural productivity, recent climate, accessibility and socio-political factors.

On average across all study villages between 2000 and 2014, indicators of basic (i.e. living conditions, such as housing, electricity and malnutrition), physical (e.g. distance to healthcare and educational facilities) and financial (e.g. number of cooperative schemes and small industries) well-being increased, while indicators of social (e.g. conflict and suicide rates) and environmental (e.g. pollution, floods and landslides) wellbeing decreased. In villages with oil palm plantations, compared to those without, the improvements in basic, physical and financial well-being occurred more slowly and the declines in social and environmental well-being occurred more quickly.

The authors suggest that government policy and certification schemes, such as the Roundtable on Sustainable Palm Oil, could help to improve the well-being of villages where oil palm plantations are being developed.

Palm oil producing countries regularly promote the positive impact of oil palm agriculture on poverty alleviation, despite limited evidence about the contribution of this crop on village well-being. Past evaluations that quantify the social impact of oil palm are dominated by localized studies, which complicate the detection of generalizable findings. Moreover, only a few of these evaluations are based on rigorous case-control studies, which limits the robustness of the conclusions. Here we examined the association between the development of oil palm plantations and change in objective or material well-being between 2000 and 2014 across villages in Kalimantan, Indonesian Borneo. We applied a matching method to evaluate the impacts of oil palm plantations across different aspects of well-being, accounting for varying time delays in the accrual and realization of benefits after plantation development. Our study reveals that the social impacts of oil-palm plantations are not uniformly positive, nor negative, and have varied systematically with biophysical locations and baseline socioeconomic conditions of nearby communities prior to oil palm development. Plantations developed in villages with low to moderate forest cover, in which the majority of communities already relied on market-oriented livelihoods, were associated with improved socioeconomic well-being compared to villages without oil palm development. However, we found the opposite for plantations developed in remote villages with higher forest cover, in which the majority of communities previously relied on subsistence-based livelihoods. Overall, oil palm growing villages were more associated with reduced rate of improvement of social and environmental well-being compared to villages without oil palm development, regardless of location and baseline community livelihoods. Our findings highlight an urgent need for careful evaluation and planning in the development of oil palm agriculture in remote forested areas. For oil palm regions that have been developed, our study shows that unsustainable livelihoods, increased socioeconomic disparity, and environmental issues remain major challenges. 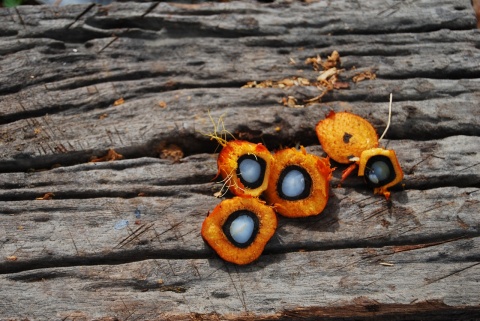