This paper models human and natural influences on the global capture of wild marine fish. The researchers show that wild fish harvest increases during the 20th century were most likely explained by improvements in fishing technology. Their simulated future projections, that assume ongoing technological progress and open access (i.e. no policy constraints), suggest a long-term decrease in harvest due to over-fishing.

After pointing out that the global fishery has been depleted to a fraction of its pristine state, the authors describe their model - which couples ecological and economical components to predict global fish harvest. Broadly, the external factors influencing the capture of wild fish are: “climate, the price of fish, the cost of fishing and the technology-dependent ability of fishermen to catch fish for a given amount of fishing effort”. Their definition of technological progress include things like more efficient boats, more effective fishing gear, better knowledge of fish behaviour and more efficient fishing practices.

The researchers tested whether their model could correctly predict the known harvest records -- a technique called ‘hindcasting’ -- and estimated the technological progress rate of 5% can explain most of the wild fish harvest increases of the 20th century. Basically, technological improvements result in fish becoming easier to catch, making fishing more profitable, which in turn increases overall fishing (and total volume of catches) for as long as the ecosystem is capable of sustaining the harvest.

The authors then make projections to estimate how external factors may influence the future harvests of wild fish. Their forecasts are made under two ‘idealised’ economic scenarios (constant price, and linearly increasing price - from greater demand), with and without climate change. When maintaining technological improvements, the global harvest decreases under open access (OA; i.e when management of fisheries is absent).

The model is ultimately used to estimate the global Maximum Sustainable Yield (MSY): this represents the largest theoretical harvests that can be approached with perfectly effective fishery management (i.e. ensuring the  reproductive potential of the stock is not compromised). The model suggested that, in the perfectly managed scenario, the global MSY would be 25% greater than OA historical peak of the preindustrial climate. Furthermore, even simulating rapid climate change, the MSY would remain greater than the OA harvest peak throughout the 21st century.

Although the model presents a very simplified approach to wild fish harvest, the paper does show that effective fisheries management is required globally to provide 20th century harvest rate increases throughout the 21st century..

The global wild marine fish harvest increased fourfold between 1950 and a peak value near the end of the 20th century, reflecting interactions between anthropogenic and ecological forces. Here, we examine these interactions in a bio-energetically constrained, spatially and temporally resolved model of global fisheries. We conduct historical hindcasts with the model, which suggest that technological progress can explain most of the 20th century increase of fish harvest. In contrast, projections extending this rate of technological progress into the future under open access suggest a long-term decrease in harvest due to over-fishing. Climate change is predicted to gradually decrease the global fish production capacity, though our model suggests that this is of secondary importance to social and economic factors. Our study represents a novel way to integrate human-ecological interactions within a single model framework for long-term simulations. 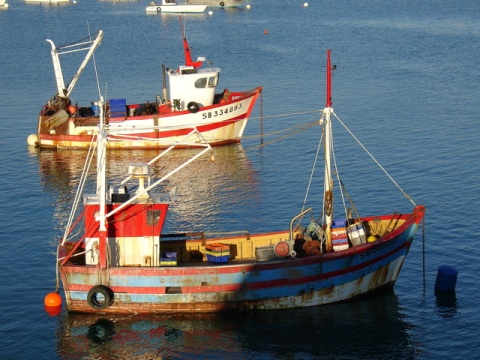