This study by researchers from the AHDB, University of Manchester and University of Warwick aims to determine the medium to long-term carbon sequestration potential of converting arable cropland to grassland, and the potential limiting factors to achieving this.

The authors begin by outlining the many claims that have been made about the C sequestration potential of soils, including retrospective suggestions of the C sequestration potential in soils on compulsory or voluntary set-aside land. They highlight the knowledge gaps and disagreements about these figures, and the need to calculate the C sequestration potential more accurately. They identify a particular knowledge gap: namely that while there has been extensive analysis of changes in soil organic carbon (SOC) associated with changing soil management practices (e.g. changing tillage strategies), there is little similar data regarding the SOC changes associated with converting cropland to grassland. The data that exists is highly variable due to multiple confounding factors that exist at small scales, or the data are based on large-scale modelling and contain many embedded uncertainties. Moreover, the authors note the likely importance of soil microorganisms in mediating soil carbon sequestration, and the very limited understanding that we have of the microbial community structure and function. They argue that if we are to properly understand the effects on carbon sequestration of converting arable land to grassland, we need to first understand what this conversion means for microbial biomass (i.e. total amount of bacteria and fungi in the soils) and community structure (i.e. relative abundance of different species, families, etc.). Similarly, carbon sequestration is known to be dependent on the chemical composition of soils, with nutrients like nitrogen and phosphorous (usually in the form of nitrates and phosphates) being essential for - and therefore limiting to - productivity: in other words, insufficient nitrates or phosphates will limit plant growth (and indeed microbial growth), and thus the carbon sequestration which depends on this growth. Understanding any changes in microbial biomass or composition, and in nutrient availability, associated with converting land from arable to grassland may provide explanations for any observed changes in SOC, and thus an avenue for mitigating any negative changes in SOC.

Therefore, the researchers involved in this study sought to determine the SOC stock changes – and the physico-chemical and microbial community changes that might underpin these – associated with land-use change from arable cropland to grassland. The study was divided into two complementary parts: 1) Replicated land use change experiments carried out at the Wellesbourne crop science research centre, UK, in which plots of land were managed as either: continuous set-aside for 14 years; set-aside for 13 years, followed by 1 year of cropping; set-aside for 12 years followed by 2 years cropping; continuous arable cropping for >30 years; one year of set-aside after >30 years cropping; or two years of set-aside after >30 years cropping; and 2) A landscape scale experiment for which they used 14 formerly arable sites in England where grassland had been established under non-rotational set-aside between 6 and 17 years previously. For comparison, the set-aside plots at these sites were coupled with adjacent plots (either in the same or a nearby field) in which no conversion to set-aside had taken place (i.e. the plots remained under continuous arable production). This yielded 17 paired comparisons. In both parts of the study, parameters of SOC, nitrogen, nitrates, phosphates and pH were measured for all conditions, and analysis of the microbial community structure was carried out by phospholipid fatty acid (PLFA) analysis (PLFAs are organic compounds which come in a variety of forms. PLFA abundance can be used as a proxy for total microbial mass, while the abundance of certain types can indicate the presence of certain microbial species. Even in the absence of knowing which PLFA profiles match with which specific microbes, similarities or differences in PLFA profiles indicate similarities or differences, respectively, between microbial community composition in different treatments).

The key findings of the study are:

Based on these results, the authors conclude that abandoning arable land and allowing it to revert to grassland would not (at least in NW Europe) result in meaningful carbon sequestration in the short to medium term. They attribute this to the decreased nitrogen availability in set-aside soils. While a number of studies have previously claimed to show significant SOC sequestration potential of grassland relative to cropland, the authors note that these studies are usually limited to a shallow depth of 10 or 15 cm, which, given the depth distribution findings of this study, may yield misleading results. The authors recommend that as a policy, widespread land abandonment would not be a feasible climate change mitigation measure, at least not without significant (and probably not feasible) management of the “abandoned” land to regulate plant species mixes and nitrogen availability of the soils.

Sequestration of atmospheric CO2 as organic carbon by agricultural soils (SOC) is promoted as a climate change mitigation option. IPCC provides guidelines for determining carbon stocks and sequestration potential, incentivising policy changes towards management of farmland for carbon sequestration. However, the basis of the assumption that agricultural soils can sequester significant atmospheric CO2 has been questioned. We sought to determine the potential for conversion of arable cropland to grassland to sequester carbon in the short to medium term and potential limiting factors. There were no differences in SOC stocks in the top 30 cm between grassland up to 17 years old and arable cropland at 14 sites across the UK. However, SOC showed different distribution patterns, being concentrated in the top 10 cm under grassland. Soil microbial communities were significantly different between arable and grassland, with higher biomass and lesser dominance by bacteria in grassland soils. A land use conversion experiment showed these changes occurred within one year of land use change. Failure of grassland soils to accumulate SOC was attributed to reduced available soil nitrogen, resulting in low productivity. The implications of these results for carbon sequestration in soils as a climate change mitigation strategy are discussed. 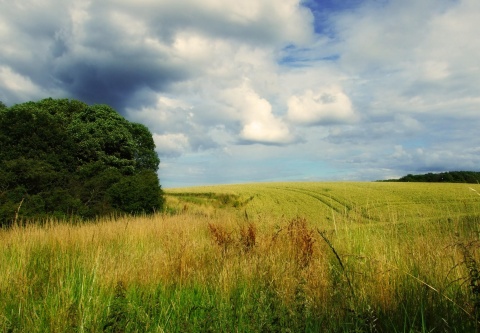