This paper by Verma et al., with FCRN member Thom Achterbosch as co-author, estimates that consumers across the world are probably wasting over twice as much food as previously believed. The study is based on the FAOSTAT Food Balance Sheets, but goes further than the Food and Agriculture Organisation in that it factors in how consumer affluence affects food waste. It finds that once people spend more than $6.70 per day (in total, not just on food), food waste starts to rise - suggesting that consumer food waste is an issue even in lower-middle income countries, not only in wealthier countries.

The study defines consumer food waste as the difference between the amount of food available to consumers (data on per capita supply from the FAO Food Balance Sheets) and the amount of food that must be eaten to maintain current body weights (calculations based on observed body weights from the World Health Survey and energy requirements calculated with age- and gender-specific basal metabolic rates) and physical activity levels (people from countries with a lower Human Development Index are assumed to have more active lifestyles on average). Note that the paper uses observed body weights (as opposed to, say, target body weights based on health recommendations) and thus allows estimates of consumer food waste to be updated over time as different body weights are observed.

On average, people in countries covered by the study had energy requirements of 2,427 kcal/day, compared to 2,704 kcal/day in food availability. In some countries, energy requirements were greater than food availability. This could be because some people are not able to eat enough to meet their needs, but it could also be partly due to food production that has not been fully accounted for by FAO estimates (e.g. from subsistence farming). The average food waste (excluding countries with a food deficit) was 351 kcal/day/person, i.e. 13% of calories available to consumers - but note that this figure does not apply at the global level, as not all countries were included (see below).

The paper also investigates the link between consumer food waste and consumer affluence, measured as annual per capita Actual Individual Consumption (data from the International Comparison Programme). It finds that consumer food waste rises with affluence, first rapidly and then slowly (a linear-log relationship). The study does not investigate the link between food prices and food waste, on the basis that previous work has shown demand for calories does not change much in response to food prices.

The paper then uses the relationship of affluence to consumer food waste to extrapolate its food waste estimates to the global level, since the countries covered in its initial estimates only cover two-thirds of the world’s population. Some of the countries not included in the initial estimates are the United States, Australia and Canada, due to a lack of body weight data in the dataset used. However, the initial sample does include countries of similar affluence and body weight, that might be expected to waste similar amounts of food.

The globally-scaled estimates of this study suggest that consumers waste around 19% of calories available to them (higher than the 13% mentioned above). In comparison, previous studies based on FAO data have estimated that consumers waste around 8% of the calories available to them. Previous estimates might therefore be overestimating the share of available food that is eaten and underestimating the share that goes to waste.

This work provides an internationally comparable consumer food waste dataset based on food availability, energy gap and consumer affluence. Such data can be used for constructing meaningful and internationally comparable metrics on food waste, such as those for Sustainable Development Goal 12. The data suggests that consumer food waste follows a linear-log relationship with consumer affluence and starts to emerge when consumers reach a threshold of approximately $6.70/day/capita level of expenditure. These findings also imply that most empirical models overestimate consumption by not accounting for the possibility of food waste in their analysis. The results also show that the most widely cited global estimate of food waste is underestimated by a factor greater than 2 (214 Kcal/day/capita versus 527 Kcal/day/capita). Comparison with estimates of US consumer food waste based on national survey data shows this approach can reasonably reproduce the results without needing extensive data from national surveys. 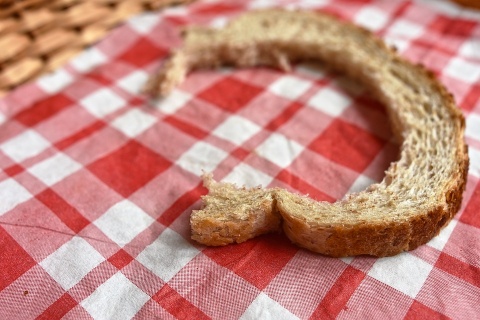