According to this paper, coconut oil cultivation puts a much greater number of species at risk per million tonnes of oil than other oils, including palm oil, despite narratives about the environmental impacts of oils usually focusing on deforestation caused by palm oil cultivation.

The figure below shows the number of species estimated to be threatened by oil cultivation per million tonnes of oil produced. Coconut oil threatens a relatively high number of species because it is often grown on tropical island nations which typically have high levels of species richness compared to mainland areas, as well as hosting many species not found elsewhere.

If the numbers of threatened species were measured per million hectares of cultivated land, the paper notes that oil palm impacts more species (17 species/mha) than coconut (5.3 species/mha). We note that this difference is likely to be partially due to the relatively high yield of palm oil per hectare compared to other oils - see Study on the environmental impact of palm oil consumption and on existing sustainability standards. 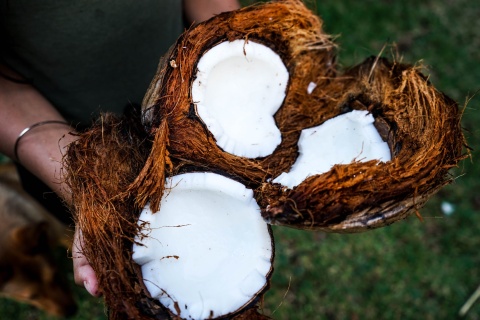