This paper in Nature addresses the question of whether a warming planet leads to increased CO2 emissions through heightened activity by soil microbes. It finds that this positive feedback mechanism exists and is likely to be of great importance in the future global carbon budget.

The paper includes 49 empirical studies on soil carbon emissions (upper 10 cm of soil only) from research plots around the globe. While the different studies provided different results, the authors felt confident enough to state that there is a general pattern that holds globally.

Its main result is an extrapolation from their empirical data to potential global outcomes. The analysis finds that by 2050 under a business-as-usual scenario, soil carbon losses could be as high as 55 billion tons of carbon. This is equivalent to 200 billion tons of carbon dioxide, were it all to be released in this form. In an interview with the Washington Post, one of the author states that this is an amount equivalent of having one extra United States emitting greenhouse gases at today’s rates.

The majority of the Earth’s terrestrial carbon is stored in the soil. If anthropogenic warming stimulates the loss of this carbon to the atmosphere, it could drive further planetary warming. Despite evidence that warming enhances carbon fluxes to and from the soil, the net global balance between these responses remains uncertain. Here we present a comprehensive analysis of warming-induced changes in soil carbon stocks by assembling data from 49 field experiments located across North America, Europe and Asia. We find that the effects of warming are contingent on the size of the initial soil carbon stock, with considerable losses occurring in high-latitude areas. By extrapolating this empirical relationship to the global scale, we provide estimates of soil carbon sensitivity to warming that may help to constrain Earth system model projections. Our empirical relationship suggests that global soil carbon stocks in the upper soil horizons will fall by 30 ± 30 petagrams of carbon to 203 ± 161 petagrams of carbon under one degree of warming, depending on the rate at which the effects of warming are realized. Under the conservative assumption that the response of soil carbon to warming occurs within a year, a business-as-usual climate scenario would drive the loss of 55 ± 50 petagrams of carbon from the upper soil horizons by 2050. This value is around 12–17 per cent of the expected anthropogenic emissions over this period. Despite the considerable uncertainty in our estimates, the direction of the global soil carbon response is consistent across all scenarios. This provides strong empirical support for the idea that rising temperatures will stimulate the net loss of soil carbon to the atmosphere, driving a positive land carbon–climate feedback that could accelerate climate change.

To read coverage on this paper, see this article in the Washington Post. 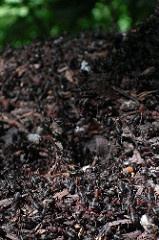