FCRN member Erasmus zu Ermgassen has co-authored this paper, which calculates variations in the carbon footprint of soy products grown in different regions of Brazil. It finds that soy from certain areas associated with loss of natural vegetation has a carbon footprint per unit of product six times higher than the average carbon footprint of Brazilian soy. It also finds that soy products imported by the European Union are more likely to be from regions linked to deforestation than soy exported from Brazil to other places, such as China.

Soy was chosen as the object of study because of its importance as a globally traded agricultural commodity, often for animal feed (for more information, see the Foodsource building block Soy: food, feed, and land use change). Soy production is also associated with the loss of forests and other natural vegetation, with much current deforestation happening in the MATOPIBA region, which consists of the states of Maranhão, Tocantins, Piauí, and Bahia. However, there are few studies on the impacts of soy expansion in MATOPIBA, with much previous research focusing on the Amazon biome instead.

The paper prepares its estimates by combining life cycle assessment with analysis of 90,000 individual export flows of soy (either as whole beans, oil or protein cake). The work builds on the Trase supply chain mapping initiative. The scope of the carbon footprint assessment includes production, processing and transport to the country of import.

The results show that the carbon footprints of soy from different municipalities are highly variable, ranging from 0.28 t CO2 eq. per t soy equivalent (a measure that allows bean, oil and protein cake to be compared) at the 10th percentile to 0.75 t t-1 at the 90th percentile.

The importing country with the greatest overall carbon footprint from soy is China, as shown in the figure below, because of the large volumes of soy products it imports.

Reliable estimates of carbon and other environmental footprints of agricultural commodities require capturing a large diversity of conditions along global supply chains. Life Cycle Assessment (LCA) faces limitations when it comes to addressing spatial and temporal variability in production, transportation and manufacturing systems. We present a bottom-up approach for quantifying the greenhouse gas (GHG) emissions embedded in the production and trade of agricultural products with a high spatial resolution, by means of the integration of LCA principles with enhanced physical trade flow analysis. Our approach estimates the carbon footprint (as tonnes of carbon dioxide equivalents per tonne of product) of Brazilian soy exports over the period 2010–2015 based on ~90,000 individual traded flows of beans, oil and protein cake identified from the municipality of origin through international markets. Soy is the most traded agricultural commodity in the world and the main agricultural export crop in Brazil, where it is associated with significant environmental impacts. We detect an extremely large spatial variability in carbon emissions across sourcing areas, countries of import, and sub-stages throughout the supply chain. The largest carbon footprints are associated with municipalities across the MATOPIBA states and Pará, where soy is directly linked to natural vegetation loss. Importing soy from the aforementioned states entailed up to six times greater emissions per unit of product than the Brazilian average (0.69 t t−1). The European Union (EU) had the largest carbon footprint (0.77 t t−1) due to a larger share of emissions from embodied deforestation than for instance in China (0.67 t t−1), the largest soy importer. Total GHG emissions from Brazilian soy exports in 2010–2015 are estimated at 223.46 Mt, of which more than half were imported by China although the EU imported greater emissions from deforestation in absolute terms. Our approach contributes data for enhanced environmental stewardship across supply chains at the local, regional, national and international scales, while informing the debate on global responsibility for the impacts of agricultural production and trade. 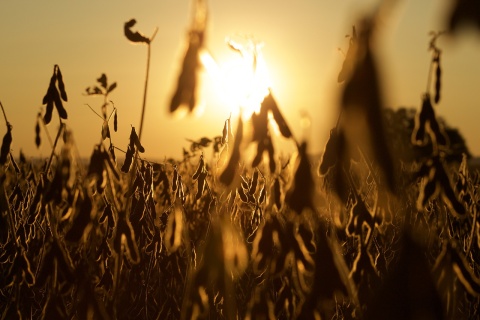