In this research on the Brazilian Amazon, FCRN member Erasmus zu Ermgassen of UCLouvain finds that forest conservation and agricultural growth are not mutually exclusive, and sheds new light on the land sparing/sharing debate. The authors argue that enforcement of Brazil's forest laws is key to encouraging the efficient use of land and the sustainable development of the agricultural sector.

The paper used econometric methods assess the impact of Brazil's "priority list" policy (where 36 municipalities were targeted for a deforestation clampdown) on agriculture, relative to control municipalities.

The main results are summarised in the figure below, showing that increased forest conservation efforts by the Brazilian environmental enforcement agency, Ibama, helped spur intensification of cattle ranching in the Brazilian Amazon. Stocking rates (cattle head per hectare) were 14-36% higher than they would have been without the government effort to clamp down on deforestation, as it encouraged farmers to switch from clearing new land to intensifying on already open areas.

The results have two implications for researchers and policy-makers. First, the apparent trade-off between forest conservation and agricultural growth in Brazil is a false dichotomy, argues the paper. Second, while the debate about land sparing typically asks if/when intensification can reduce agricultural expansion, this study shows how this logic works both ways – protecting forests can also induce agricultural intensification.

A mix of public policy and market interventions in the mid-2000s led to historic reductions in deforestation in the Brazilian Amazon. The collateral impact of these forest conservation policies on agricultural production is still poorly understood, though evidence is sorely needed given the economic importance of agriculture in Brazil and many other forest-rich countries. We construct a ten-year panel dataset for agriculture and deforestation in the Brazilian Amazon (2004–2014), and use two complementary difference-in-difference strategies to estimate the causal effect of one of Brazil’s flagship anti-deforestation strategies, the Priority List (Municípios Prioritários), on agricultural production and productivity in three sectors: beef, dairy, and crop production. We find no evidence for trade-offs between agriculture and forest conservation. Rather, reductions in deforestation in priority municipalities were paired with increases in cattle production and productivity (cattle/hectare), consistent with a model where policy-induced decreases in the value of clearing new land cause credit-constrained farmers to shift investments from deforestation to capital investments in farming. The policy had no consistent effect on dairy or crop production. Our results suggest that in regions with large yield gaps and where technologies for increasing yields are readily available, efforts to constrain agricultural expansion through improved forest conservation policies may induce intensification. 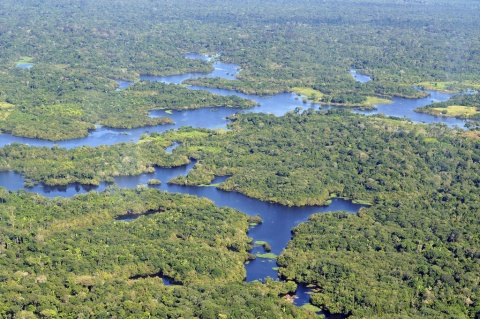