Setting the TABLE for COP27: Does methane from livestock matter? 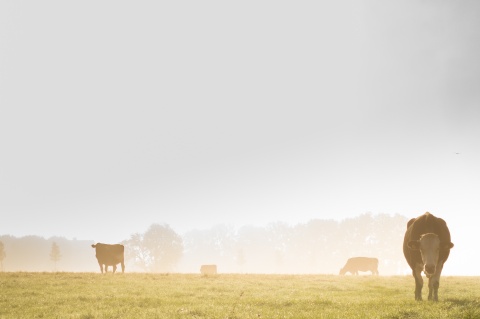 Methane is an important greenhouse gas (GHG), second only to carbon dioxide (CO2) in its overall contribution to human-driven climate change. It’s also very powerful, with a warming potential around 29 times stronger than CO2 on a molecule-by-molecule basis, and it's almost certain to be a point of conversation at this year's COP27. COP26 saw the launch of the Global Methane Pledge and since then 121 nations have signed up to it, thereby agreeing to reduce their methane emissions by 30% by 2030. With the food system being one the largest anthropogenic source of methane – even more so than oil and gas – efforts to honour this pledge will likely have implications for how agriculture is practiced; and potentially for what we eat.

Ruminant livestock - cattle, sheep and goats - are often acknowledged as major sources of methane emissions via their digestive processes, and this suggests we may need to rethink how we rear these animals, and how much meat and dairy we eat. But not everyone agrees; some argue that methane, with its very short atmospheric lifetime, just isn't as important as getting to net zero as for long-lived GHGs such as carbon dioxide.  And not all methane is equally damaging either, since methane generated from cattle and other biogenic sources is part of the short term carbon cycle, unlike methane from oil and gas extraction.

In short, for some stakeholders, methane matters, and because methane matters, so does ruminant livestock production and reducing associated meat and dairy consumption. But for others, action to reduce methane through measures that focus on ruminants will at best be ineffectual in keeping global temperatures down and at worst, push the urgent need to get CO2 emissions down into the long grass, while also having negative implications for the livestock sector and those who depend upon it.

The issues are complex and the debates are often heated, bringing to the fore fundamental questions about how we use land, how we should farm, what we should eat, and who wins and loses when it comes to climate mitigation.

To explore these questions in more detail, please join TABLE for a panel discussion bringing together key thinkers and researchers working on global climate mitigation and agriculture.

This event is moderated by Tara Garnett who is Director of TABLE and a researcher at the University of Oxford.