Dr Kelly Reed is an archaeobotanist with interests in food systems, agricultural development and cultural adaptations to environmental change in the past. She is currently the programme manager for the Oxford Martin Programme on the Future of Food and the Wellcome Trust-funded Livestock, Environment and People (LEAP) project based at Oxford University.

Dr Lisa Lodwick is an archaeologist who researches shifts in agricultural production in Iron Age and Roman Europe and the Mediterranean. She is currently a post-doctoral research fellow at All Souls College, Oxford University. 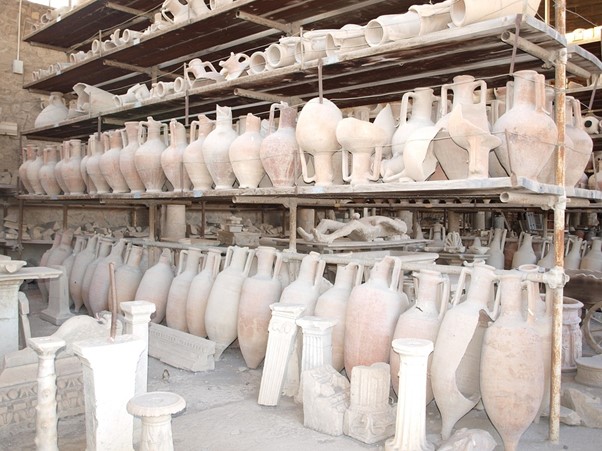 Since agriculture began, food systems have constantly evolved, each change bringing challenges and ever-greater diversity and complexity. The emergence of city-states has been a major driver of food system changes, bringing together large populations within defined boundaries and requiring complex governance to deliver sufficient quantities and quality of food. As local food production began to be insufficient to support such large, concentrated populations, it became necessary to source goods from further afield to maintain a steady supply of food. Subsequently, trade networks for grain, nuts, oils, fruit, and wine developed using road systems as well as river and sailing routes. Soon standardised weights and measures were established, along with the expansion of money and accounting. This blog explores the journey of how societies moved beyond the largely localised agricultural system seen in the Neolithic towards a more complex food system involving longer-distance trade across nations and even continents.

Developing food systems in the Mediterranean

In Greece and the wider Aegean, local and regional trade and exchange existed from Minoan and Mycenaean times in the Bronze Age (3000 BC – 1100 BC). Produce from surrounding farmlands were collected, recorded and stored in palaces, within large store-rooms as well as huge pithoi (storage vessels) that have been identified archaeologically. The discovery of tablets (written in Linear A and B) listing commodities in the archive areas at the palace of Knossos, Crete, suggests a highly organised bureaucracy. This system of record-keeping controlled incoming and outgoing products, including items for local transport and overseas trade (Galaty and Parkinson 2007).

The “Ulu burun”, a 3,000-year-old shipwreck discovered in 1982 off the coast of south western Turkey, is believed to have been a royal order carrying 20 tons of some 18,000 artefacts. This included precious jewels and luxurious raw and finished goods traced back to at least seven different cultures, including Mycenaean, Syrio-Palestinian, Cypriot, Egyptian, Kassite, Assyrian and Nubian. The ship also contained food remains such as almonds, acorns, pine nuts, wild pistachios, olives, pomegranates, figs, two types of grape seeds, coriander, nigella (black cumin) and sumac seeds (Haldane 1993).

Long-distance trade opened new opportunities. In some cases, foreign imports were gradually replaced by local production centres. For example, from the 9th century BC Phoenician colonies along the east coast of Spain enjoyed imported wine from across the Mediterranean, but by the 7th century BC local wine and pottery production emerged cornering the market (Buxo 2008). Gómez Bellard et al. (1993) hypothesised that the territory of Benimaquia, Spain, could have produced approximately 400 hl of wine annually, which would have needed between 1,300 and 1,600 amphorae for storage. By the 4th century BC, the conquest of the Persian Empire by Alexander the Great unsurprisingly had a huge impact in inter-regional trade, allowing Greek traders greater access to Asian goods, while the Egyptians were also establishing trading posts along the east coast of Africa.

Based on Greek literary evidence, the South Asian (mostly Indian) spice trade to the West may have begun in the late 6th/5th centuries BC. Pepper was traded from the 4th century BC to the Assyrians, the Babylonians, as well as the ancient Egyptians, Greeks and Phoenicians who introduced pepper to the western Mediterranean (Ravindran 2000:5). However, the rarity of Asian goods in the Mediterranean suggests that the Indian Ocean trade was relatively small-scale until the Romans conquered Egypt ca. 30 BC. Archaeological and documentary evidence (such as the logbook Periplus) suggest large quantities of goods were traded via the Red Sea between Europe and the Indian Ocean from this point until the Roman Empire began to decline (Cappers 2006; Van der Veen 2011; Schoff 1912:44). As well as pepper, other food commodities were traded, including rice, cinnamon, cloves, ginger, cardamom and turmeric. We also see spices, such as pepper, mentioned in numerous recipes recorded in the cookbook Apicius, which was possibly compiled in the 1st century AD (Grainger 2006). The reception and consumption of Eastern goods were seen as an expression of luxury in Roman society and as such many political and military decisions were strategically aimed at promoting and protecting trade itineraries and diplomatic links between Rome and the East.

The scale of Roman food production

Around the time of the Emperor Augustus (27 BC - AD 14), Rome contained up to one million inhabitants (a population size that was not matched again in Europe until the early Middle Ages in Constantinople). Although evidence is sparse, common diets would have been dominated by cereals, wine, and olive oil, but would have included legumes, fruits and vegetables, as well as a small amount of meat, mainly goat/sheep, poultry, and fish. Evidence of such a wide range of foods eaten by the general population can be seen at Herculaneum, where the content of an ancient septic tank was examined.

Rome’s huge population could not be fed solely by the local or even regional agricultural system. Fortunately, the developing trade networks across the Mediterranean provided a solution. Rome began to rely on shipments from several agricultural powerhouses, from the Levant to Iberia to Libya. Cicero (106-43 BC) also referred to Sicily, Africa, and Sardinia as “the three great granaries of the republic”. This Mediterranean-centred empire meant that although land transport was not easy, goods were within feasible carrying distance by cart or donkey to a navigable river or the sea. Logistically officials had to find a way to facilitate the introduction of large-scale shipping that allowed effective, organised grain distribution, as well as providing the physical infrastructure to maintain Rome’s food supply. In particular the development of hydraulic concrete, which could be cast and set underwater, revolutionised the design of harbours and other maritime structures from the 2nd century BC.

Roman builders constructed warehouses and cellars, while potters produced containers not only to protect goods but also to help stabilise temperatures and humidity levels so that foods could be stored for potentially long periods of time. That said, food losses, from pests or spoilage, would have still been an issue. Large warehouses (horrea) were constructed at Portus and Ostia (the ports of Rome) to store grain, olive oil, wine, and other commodities (Van Oyen 2020). Texts suggest that Romans imported 60,000,000 modii (c. 400,000 tons) of grain annually during the 1st century AD (Cheung 2020). Goods were then transferred to shops and bakeries. At Pompeii we see large bakeries, such as the Casa dei casti amanti (or House of the Lovers) containing four mills, a kneading machine, two dough risers and a large bread oven (Monteix 2016). 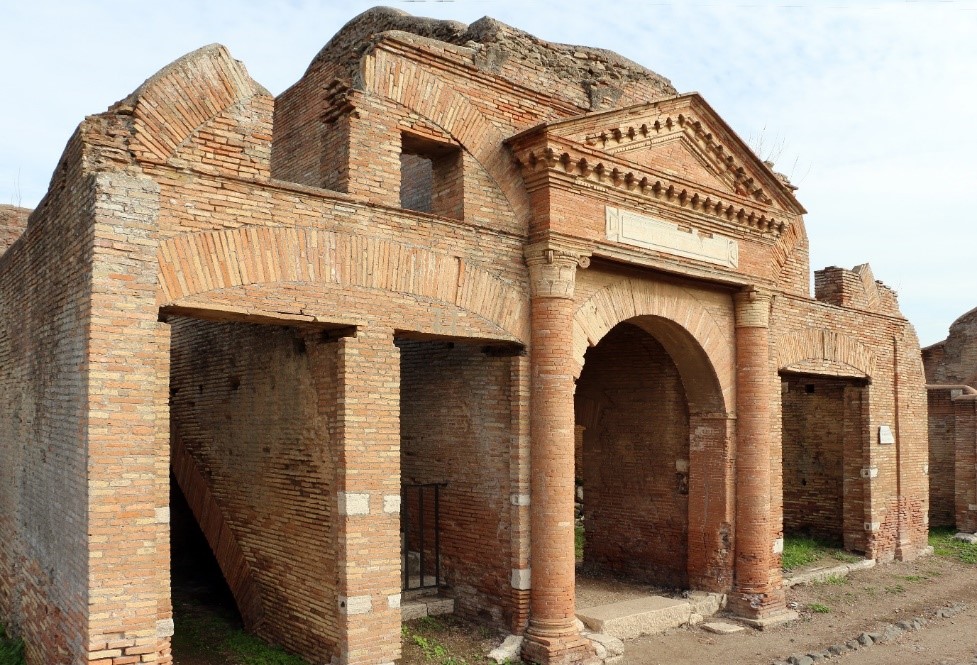 By the 2nd century Greek author Aelius Aristides described Rome as the warehouse of the world, where Roman consumers were able to access different foods almost year-round (usually dried or preserved in some way to survive long distances). Remarkably, Columella and Pliny refer to proto-greenhouses (specularia) constructed for the Emperor Tiberius (42 BC–37 AD), made from translucent mica, to grow cucumbers year-round. To keep up with demand, large food-producing installations were built across the empire. For example, large fish salting factories, producing the fermented sauces garum and liquamen, have been discovered around the Mediterranean (Lowe 2018). Flour was produced by large water-powered mills, including the iconic complex at Barbegal in southern Gaul (now southern France), where 16 water mills were built in the 2nd century AD. Fed by a 9km aqueduct, it is estimated that these mills produced 25 metric tons of flour per day, which could have fed at least 27,000 people (Sürmelihindi et al 2018).

Along with bread and wine, olive oil was also produced in great quantities, with large scale exportation from regions of Spain, Tunisia and Libya. Within the region of Leptis Magna it is estimated that 150 olive presses could have produced 15 million litres of olive oil per annum at its peak (Mattingly 1988). This large scale trade is highlighted by the discovery of an artificial hill, Monte Testaccio, 150 feet tall, in Rome, made up almost entirely of broken Roman olive oil amphorae, that were probably only used once, from Spain and North Africa.

Who controlled the food supply to Rome?

Politically Rome had an oligarchic government, dominated by the senate during the Republic and an emperor in the Principate (1st to 3rd centuries AD), with administration mostly devolved to the governors of provinces and the local councils of landowners, which ran the cities-cum-territories. Supply was largely left to private enterprise, although political pressure on the Roman government to deal with actual or feared shortages led to some institutionalised public underpinning of the mechanisms of supply.

In particular, we see the establishment of the annona, which was a dole of subsidised or free grain (later bread, olive oil, pork and wine), provided by the government to its poorest residents. The importance of providing enough grain (food) to the people to avoid rioting in Rome meant that this system was maintained at any cost for hundreds of years. Generally, taxes on arable land were calculated in wheat, but they could be paid in other crops or even cash at a price set by the state. Compulsory purchase of wheat also occurred, especially in Egypt, if the state failed to meet its wheat targets. Yet, the Roman wheat market was essentially a free market, comprising and being influenced by the administered market of the imperial annona and civic interventions (Kessler and Temin 2007). The success of this system, which provided reliable supplies of wheat to Rome, resulted in no serious food shortages in Rome after AD 6 until the Antonine plague in the late 160s.

The legacy of early long-distance trade

Long-distance trade in these early periods allowed widespread developments to take place in the field of infrastructure and connectivity, facilitating the sharing of ideas, culture, and traditions between different nations. Long-distance trade also brought new food crops into Europe that soon became staples, such as onion, garlic, and pear. Although the decline of the Roman Empire resulted in a gradual breakdown of large-scale trade between Europe and Asia, trade links persisted, allowing the flow of different foods and ideas to continue to shape the history of European diets.

Buxó R (2008) The agricultural consequences of colonial contacts on the Iberian Peninsula in the first millennium. Veget Hist Archaeobot 17:145–154

Monteix, N. (2016). Contextualizing the operational sequence: Pompeian bakeries as a case-study. In: A. Wilson and M. Flohr. Urban craftsmen and traders in the Roman world. Oxford Studies in the Roman Economy: Oxford University Press, pp.153-182, 2016

Schoff WH (1912) The Periplus of the Erythraean Sea: travel and trade in the Indian ocean by the merchant of the first century. Longmans, Green and Co, New York