Matthew (Matt) Jordon is a DPhil candidate at the University of Oxford, with research interests in sustainable ruminant production in the UK, payments for ecosystem services, and global food security. In particular, Matt is keen to conduct research that maximises engagement with the UK farming community to establish viable land management strategies that deliver a spectrum of ecosystem services from farmland alongside profitable food production. Matt grew up on a sheep and beef cattle farm in the north east of England, and studied undergraduate Biological Sciences, also at Oxford. 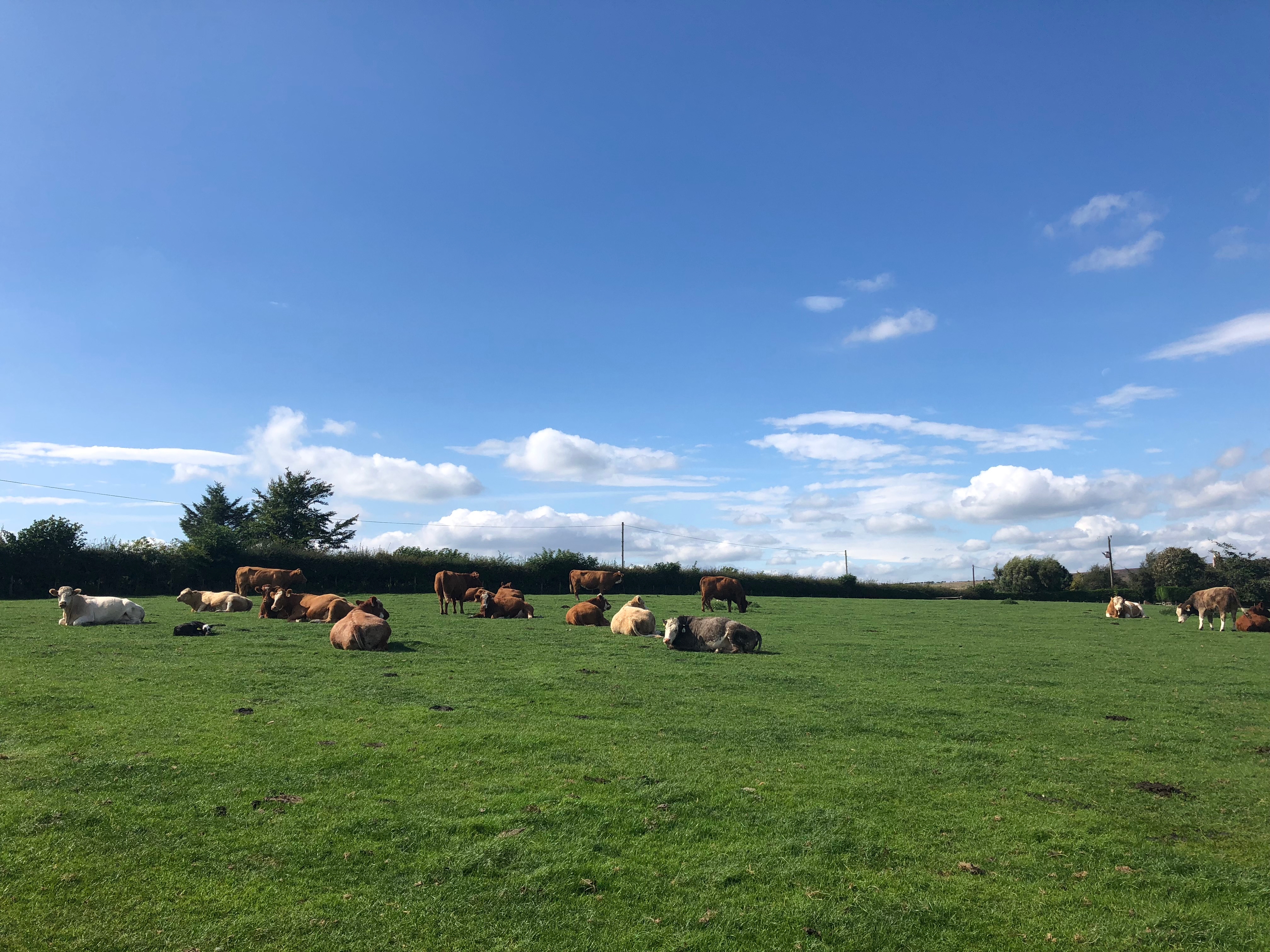 Ruminant agriculture has received increasing attention in recent years as a major source of greenhouse gas (GHG) emissions1 and other negative environmental externalities such as reduced water quality2 and water flow regulation3. Some in academia and the media portray reducing consumption of animal products – particularly red meat and dairy products – as a priority in climate change mitigation4, whilst environmentalists endeavour to tempt the British public with alternative uses for the British countryside that, they argue, would be preferable to ruminant production5,6. It is increasingly easy to accept the simple narrative of ‘the less meat we eat, the better’.

However, I believe that UK ruminant livestock farmers have the unique potential to manage the British countryside to deliver a number of public goods, alongside profitably producing environmentally-sustainable premium-quality meat. The potential ‘prize’ is a carbon-neutral UK ruminant livestock sector, as part of a rural landscape that delivers a number of publicly-desired ecosystem services. Whilst currently speculation, this warrants serious investigation as a future scenario for livestock production and rural landscape management; I hope to dedicate my PhD studies to this endeavour. We do not have to buy into an ‘all or nothing’ mindset regarding the future of UK meat production. There is potential for a ‘best of both worlds’ scenario that substantially mitigates the negative environmental externalities of livestock production whilst maintaining or even enhancing the benefits.

A space for sustainable livestock?

Growing up on a sheep and beef cattle farm, I am understandably reluctant to write off UK ruminant farming. The sector is a central part of the rural economy, community and cultural heritage in many parts of the UK, particularly the uplands7. It also creates landscapes which provide important tourism revenue8. For example, the English Lake District is a UNESCO World Heritage Site, in part due to the cultural landscape created by traditional livestock farming9. Although ‘wilding’ projects like Knepp Estate generate substantial revenue from eco-tourism10, it remains to be seen how well such income streams would scale if increasing numbers of land managers were to pursue rewilding.

The GHG emissions implications of UK livestock production have been comprehensively evaluated elsewhere11,12, highlighting that whilst benefits exist under certain production scenarios, the negatives associated with current levels of production and consumption outweigh any benefits. Work within the FCRN has explored several scenarios for potentially sustainably future livestock production13,14, including so-called ‘livestock on leftovers’, which has been demonstrated to offer a non-trivial contribution to dietary protein requirements whilst requiring less crop land than completely vegan diets15.

Several high-profile papers and reports16,17,18 have highlighted the potential health – and environmental – benefits of reducing meat consumption. While this body of evidence cannot be ignored, on a pragmatic note, it has been argued that including small (i.e. reduced) amounts of meat and dairy in their diets is the easiest way for most people to eat healthily11.

There is a growing consensus that i) emissions from livestock production need to fall to mitigate climate change (reaching net zero globally by 2050 to restrict global warming to 1.5oC19), and ii) UK meat consumption needs to fall to meet dietary guidelines (e.g. the UK government Eatwell Guide20). These requirements are not incompatible with UK practitioners transitioning to produce a small amount of high quality, carbon-neutral meat, rather than completely cease production. Even if a complete cessation of consumption for climatic and health reasons were the aim, this is not going to happen overnight; despite the rise of vegan/vegetarian/flexitarian diets, consumer demand would take time to wane. Either way, increasing the sustainability of UK ruminant production ought to be a priority.

Eliminating livestock production is one way to eliminate their emissions, but this may not be the only route available. Although simply attempting to make ruminant production more efficient does not deliver adequate emissions reductions21 (and the concept of efficiency is itself contested and ambiguous12), I would argue that there is potential for emissions mitigation measures to be integrated into the landscape alongside the continued presence of ruminant agriculture, albeit at a reduced level of production.

A role for agroforestry?

An analysis by the UK Committee for Climate Change (CCC) found that land use change from agriculture to carbon sequestration activities (afforestation, peatland restoration, energy crops and agroforestry) could deliver deep emissions reductions (35-80%) by 205021. The Committee note that reducing meat consumption in line with dietary guidelines would release up to 50% of grazed land for these activities. Although afforestation or planting energy crops are largely incompatible with continued livestock farming on the same land, agroforestry and – to a degree – peatland restoration can occur alongside animal agriculture.

Integration of trees and hedgerows into livestock farming landscapes (i.e. silvo-pasture) has the potential to deliver a number of ecosystem services simultaneously, including carbon sequestration, improved water quality and quantity, and enhanced biodiversity. According to the CCC, the main barrier to farmers implementing such systems is a lack of financial incentive21, in part to compensate for the loss of land from production.

However, the UK government’s 25-year environment plan includes proposals for a new environmental land management system, which will incentivise environmental enhancement, including climate change mitigation measures22. “Public money for public goods” could incentivise the planting of trees on livestock farmland, facilitating a transition towards carbon-neutral animal agriculture in the UK. Furthermore, Green Alliance (a UK think tank) have recently highlighted the potential for private capital to fund land-based carbon reduction schemes; trees planted could deliver multiple ‘stackable’ benefits which can be marketed to different buyers23.

To the best of my knowledge, no one has yet demonstrated the feasibility – or otherwise – of transforming UK farming landscapes to bring ruminant emissions to net-zero. I propose to investigate the extent to which uptake of agro-forestry management practices (with inevitable corresponding reductions in stocking densities) would be sufficient to mitigate ruminant methane emissions with compensatory carbon dioxide drawdown by growing trees. There is also a need to establish whether the revenue streams from (reduced) livestock production plus payments from the government and/or private capital would make such practices an economically viable option for farmers. However, there are a number of reasons for caution:

It may not be impossible to make some level of ruminant production environmentally sustainable. Negative environmental externalities (GHG emissions, water pollution, increased flood hazard) could potentially be minimised or mitigated. Although it seems inescapable that UK ruminant stocking densities will have to be reduced from current levels, measures such as the integration of trees into remaining ruminant farming landscapes could help improve sustainability. Due to the heritage of ruminant livestock farming, and the cultural services delivered by grazed landscapes, I would argue that the persistence of sustainable (and therefore probably reduced) sheep and cattle farming in the UK is capable of a net delivery of more public goods than their complete elimination.

Although I have presented some strands of evidence which suggest the possibilities, large uncertainties remain. I aim to spend the next three years of my PhD (and beyond!) working at the interface between science and land management, collaborating heavily with farmers, to try and get closer to establishing whether UK ruminant livestock production could have a more sustainable future. Please contact me (matthew.jordon@linacre.ox.ac.uk) if you work in this area and have any comments or suggestions.

21.    Committee on Climate Change (2018); Land use: Reducing emissions and preparing for climate change

22.    HM Government; A Green Future: Our 25 Year Plan to Improve the Environment

24.    Allen, M. et al. (2018); A solution to the misrepresentation of CO2-equivalent emissions of short-lived climate pollutants under ambitious mitigation; Climate and Atmospheric Science 1:16